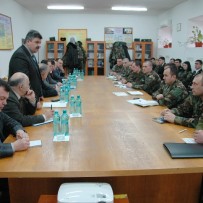 Major Viorel Sîrghi – head of training and peacekeeping operations section , deputy chief of the center of continous training pointed out that such meetings are  crucial in which future peacekeepers have the opportunity to know first-hand information. This course is designed to train officers involved in carrying out missions in Moldova’s security zone as military observers and staff officers for the Command of  Joint Peacekeeping Forces (CJPF).

The same source informs that from  February 18th to  March 5th 2013, the Center of continuous training instructs 22 officers, specialists in peacekeeping operations for Moldova’s security zone, five of which are representatives of the Ministry of Internal Affairs . Instructors are the officers participating as military observers in the area of security and peacekeeping operations under UN , but also OSCE, Public Policy Institute, Ministry of Internal Affairs,  Company  of Joint Peacekeeping Forces representatives etc.

Similarly, during the training course of officers meant to perform the tasks in Moldova’s security zone, the military learn the art of negotiation, the moderation of discussion and communication with the media.