The commandment and staff application “DACIA – 2013” 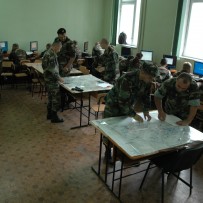 Chisinau, June 5 2013 – In the Armed Forces of Military Academy “Alexandru cel Bun” the application of commandment and staff “DACIA – 2013” started.

The present application is the final evaluation segment of the militaries of National Army, participants in the Staff Course for inter-arms officers, brigadier level, organized and developed within the Continuous Improvement Centre of Armed Forces of Military Academy “Alexandru cel Bun”.

According to Colonel Iurie Girnet, the head of the staff of management application, within the activity will be used procedures of operations planning, according to modern military standards.