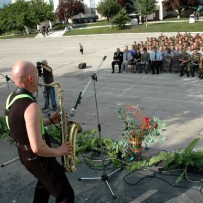 Chisinau, June 6 2013 – The Soloists band  “Moments of  Moldova” organized a concert for students of the Military Academy “Alexandru cel Bun”, that took place on the military plateau of the institutions.

According to the organizers, the band is led by Constantin Pavliuc, and the purpose of this event is to promote the young talents among the students.

At the festive concert participated the military students of the Military Academy and the students of the United States of America, within an exchange program of experience between the institutions of higher education.