Military Academy participated at the “Recruit Day” in Ciocana 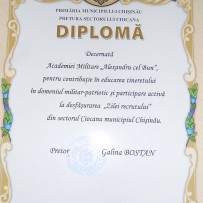 On the 25 of October, 2013, the personnel of the Military Academy of the Armed Forces “Alexandru cel Bun” attended the celebration  “Recruit Day” organized by the Military Center of Chisinau together with the Ciocana sector.

The event was attended by young people, that are planned to be incorporated into the ranks of the National Army.

Also at the event, students, presented an exhibition of arms found in the National Army.