The experts of the Military Academy train teachers from Iraq 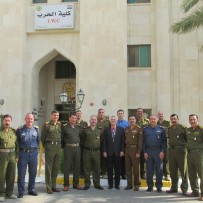 On the 17th of February 2014 Lieutenant Colonel Ghenadie Safonov, head of Communications and Informatics Department of the Armed Forces, “Alexandru cel Bun” together with professor James Grabe, from the Institute of Leadership and Public Policy in Geneva held a workshop at the University of Defence for Military Studies of Iraq in Baghdad.

The workshop aimed to train the military Iraqi teachers of The War College and National Defence College of Iraq, activity of the DEEP program ( Defense Education Enhancement Program).

During the course of the workshop, the expert of the Military Academy of the Armed Forces, “Alexandru cel Bun” presented techniques and modern education activities aimed to help teachers of the Defence University for Military Studies of Iraq in order to modernize the military education system.

It should be noted that more and more military experts and academics from the Military Academy of the Armed Forces, Alexandru cel Bun” are requested by NATO partners to participate in the exchange of experience and modernization of training process of many educational institutions in the world.