Specialized course in the stock management of weapons and ammunition 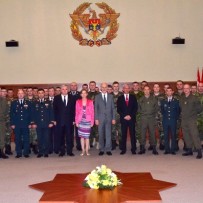 CHIŞINĂU, April 30, 2015 —A graduation ceremony of the second stage of specialized training in the stock management of weapons and ammunitions was held at Ministry of Defense. The event was attended by the leadership of the Ministry of Defense and Main Staff, representatives of the OSCE Mission in Moldova, ambassadors, and National Army officers and NCOs.

This course was held at the Armed Forces Military Academy “Alexandru cel Bun” this year between April 6 and May 1.

The Minister of Defense Viorel Cibotaru said that to raise the level of safety and security in ammunition and weapon storehouses is a priority for the National Army and the management of the institution strives to achieve this objective.

Mr. Viorel Cibotaru thanked the ambassadors of the countries involved in the implementation of the course, mentioned the permanent support granted to National Army through many projects which contributes not only to nonproliferation and improvement of ammunition storage, but also to the avoidance of possible uncontrolled explosions that would endanger civilian population that lives near the ammunition storage depots

According to lieutenant colonel Andrei Camerzan, Head of weapons and ammunitions in the Logistics Directorate, within the second stage of that course, representatives of the ministries of Defense, Interior and Justice, and Security Information Service have been trained by a group of National Army, and assisted by instructors from Austria, Canada and Sweden.

Lieutenant colonel Andrei Camerzan specified that the course schedule, covered topics on the typology and ammunition technology, techniques for stamping, painting and burning ammunition and modern methods of packing and storing them in maximum security conditions.

The course specialized in the stock management of weapons and ammunitions, started in the spring of 2014, and is conducted in three levels (moderation, mentoring and monitoring).

Thus, in the first stage, international experts have trained a group of National Army military in the field. The second stage, Moldavian troops that gained experience have trained another team of specialists in munitions management of law enforcement institutions in Moldova, being assisted by experts from Austria, Sweden and Canada.

In the third stage, which will take place in 2016, the National Army will conduct theoretical and practical sessions under the supervision of foreign experts.

The course in the stock management of weapons and ammunitions is part of a series of projects implemented under the Memorandum of Understanding between the Ministry of Defense and the OSCE on the implementation of a complex program in the field of small arms and light weapons, and conventional arms in Moldova, signed on October 28, 2010.