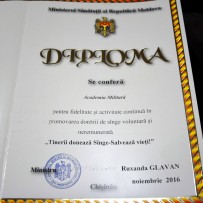 CHISINAU, November 17, 2016 – Within the Ethno Cultural Youth Festival from the Republic of Moldova, there were held diplomas for the most active young people and institutions from Moldova who celebrated the International Students’ Day inside the shopping center Jumbo.

It should be noted that the students of the Military Academy and militaries by contract actively participate in voluntary blood donation campaign organized by the National Centre for Blood Transfusion.