Home » Evenimente » The records of the instituion activities – 2016

The records of the instituion activities – 2016 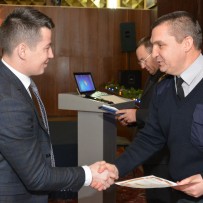 According to Deputy Commander for education, colonel Gheorghe Țurcanu, the achievements in education, scientific work, administrative work, military discipline are presented at the end of the year.

Attending the event, the commandant (rector) of the Military Academy, colonel Sergiu Plop, said that during 2016, the institution has done significant progress, thus the main effort was focused on graduation of the first cycle, graduation of the second cycle, master’s degree and 2016 admission.

Also, colonel Sergiu Plop pointed out that there was a great success in promoting the image of the Military Academy that was achieved by institution representatives at various activities organized by local military centers and local government. Also, the relevant achievements are concerned to improvement of the institution’s infrastructure.

During the meeting, militaries by contract and civilian employees of the institution were awarded diplomas from the Minister of Defence and from Commandant (rector) of the academy for a fruitful activity during 2016.

Finally, commandant (rector) of the Military Academy, Colonel Sergiu Plop congratulated all those who were present at the meeting with winter holidays.