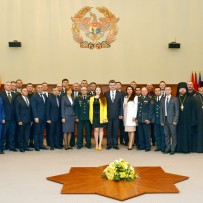 CHISINAU, April 28, 2017 -Chief of National Army General Staff, Commander of the National Army, Brigadier General Igor Cutie handed diplomas to the graduates of postgraduate course in security and national defence field during a ceremony organized at the Ministry of Defence.
The brigadier general congratulated the 33 graduates and thanked them for choosing this course by wishing them successes and accomplishments within the institutions they represent. He also thanked the teachers who contributed substantially to providing training in the process of study.
According to the acting commandant (rector) of the Armed Forces Military Academy “Alexandru cel Bun”, colonel Gheorghe Ţurcanu, the course took place between 16 January – 21 April this year. The study program and the didactic activities were carried out by experts from different leading structures in the country, as well as representatives of the national and international academic environment.
During the studies, the participants had numerous familiarization visits at the ministries and institutions of the state, also they were at the EUBAM Mission Office, Odessa, Ukraine.
It is worth mentioning that the postgraduate course in security and national defence field started in 2014 and is organized and carried out annually by the Defence and Security Strategic Studies Centre of the Armed Forces Military Academy “Alexandru cel Bun”, with the support of the  internal and external partners.