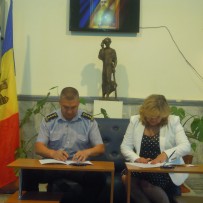 According to colonel Sergiu Plop: “The two institutions agree to initiate the partnership on the basis of active partnership on multiple levels of interest in the educational and cultural field by promoting reading and capitalizing on the national and universal heritage in the scientific and research domain. This collaboration protocol has the character of a framework document and covers the entire activity to achieve agreed goals, ” said colonel Sergiu Plop.

This collaboration agreement is for the first time for both institutions and on this occasion, the National Library of the Republic of Moldova donated about 150 book volumes from the fields: history, public administration and dictionaries for the Armed Forces Military Academy “Alexandru cel Bun “.