Familiarization visit to the Military Academy 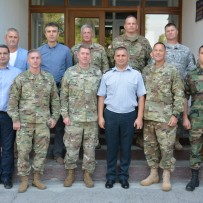 During the visit, Military Academy Commandant (rector), Colonel Sergiu Plop informed the US delegation both with the history and stages of the institution’s development, the basic objectives and missions, the activity of the didactic-scientific subdivisions, and prospects for further development.

The visit was carried out in the context of inter-institutional academic cooperation at international level.