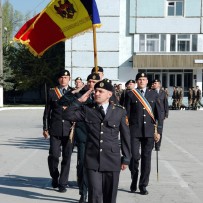 The Tricolor National Flag blessing and the hoist on the mast were the key elements of the event. Within the military ceremony, State Flag was carried by four soldiers and was caught at the mast. Flag corners were tied by the rope of the mast, and a group of priests held a worship service and a prayer of blessing.

The Commandant (rector) Interim of Military Academy “Alexandru cel Bun” Colonel Sergiu Timercan, said that the flag is the symbol of statehood and independence of the Republic of Moldova, and honoring it is sacred for the militaries of the National Army.

Moldova’s national Flag Day is celebrated on April 27. The feast was established by Chisinau Parliament on April 23, 2010. The tricolor flag was officially designated as a state flag on April 27, 1990 by the members of the first legislature.