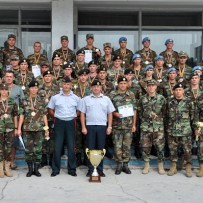 CHISINAU, from the 19th of August till the 23rd of August, 2013, in the Military Academy of the Armed Forces “Alexandru cel Bun” took place the “Defense Minister Cup” in the applied military contest,  on the plateau of the institution.

In the general rank, the Military Academy students were on the first place, gaining eight medals in the individual and team events. The 22 Battalion of peacekeeping ranked on the second place, being followed by those from the special battalion “Fulger”, which ranked on the third place.

The cup was handed to the winning team by the Chief of the Major Staff, the commander of the National Army, Brigadier Vitalie Stoian and the teams that won the second and the third places were decorated with medals and diplomas.

At the same time, the Chief of the Major Staff, the commander of the National Army awarded the special prize of the competition to lieutenant-colonel Radu Turcan, teacher of the Armed Forces Military Academy “Alexandru cel Bun”, which became a winner at the wrestling, being rewarded with a ram.

“Defense Minister Cup” on military-applied events are held annually, and the purpose of the competition is the improvement of sports performances and skills of the National Army militaries.

In this year, 132 soldiers from 11 units of the National Army took part in the competition