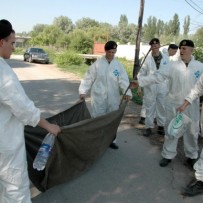 On the 26th of October 2013 the students and Military Academy staff participated in planting trees and bushes in the action “A tree for our eternity”.
According to Lieutenant Colonel Gennady Bruma, logistics section chief, more than 240 militaries of the Military Academy planted various types of saplings as apricot, oak, walnut and acacia trees.
There were planted over 100 saplings and bushes.
At the same time students and militaries cleaned the adjacent territory of the academy and the forest strip as well as the territory near the river Bic, on a stretch of 1.8 km.