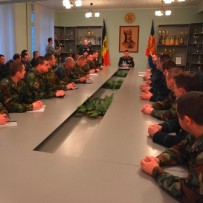 CHISINAU, January 20th  – For the first time, the Leadership Postgraduate Course at strategic and operational level was initiated  within the Armed Forces Military Academy „Alexandru cel Bun”  during an opening ceremony.

The course will prepare competent personnel to work in positions of  brigade commanders, heads of departments in the General Staff of the National Army,  task forces commanders of operational and strategic level.

According to the commander (rector) of the Armed Forces Military Academy  “Alexandru cel Bun” colonel Mihail Bucliş, this course is a premiere for the National Army and Military Academy and for the national higher military educational system. The course is based on War College programs of several partner countries and is similar to postgraduate studies at operational and strategic level.

Leadership Postgraduate Course has a duration of 17 weeks and will take place from January 20th  to  May 15th, 2015.