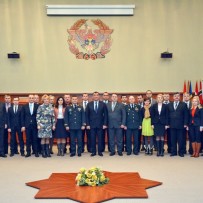 The opening ceremony of the course was held at the Ministry of Defense.

Attending the event, the Minister of Defense Valeriu Troienco, said that in the current security context, these studies are vital, and the presence of representatives of state structures and non-governmental institutions involved in managing the concerned sector, fully proves these statements: “I hope that those involved in the reform of security and defense sector, will help change citizens’ attitude towards security, which means more than military domain”.

“It is a political-military course for officials, civil servants and representatives of civil society, non – governmental organizations, policymakers and those in charge of security and defense policies of the state,”  stated colonel Mihail Bucliş.

The course is based on the curriculum of the National Defense College of Romania, UK, France, USA, Canada, Poland, Germany, Italy and Estonia. It covers a wide range of topics, from international relations to the strategies and community policies of the European Union.

Commander (rector) of the Armed Forces Military Academy added that during the course, participants will have the chance to visit central public authorities, military units and strategic places of our country, such as Iasi-Ungheni gas pipeline, Giurgiuleşti port, international airports and strategic customs posts of the Republic of Moldova.

The Postgraduate course in security and national defense entitled “Current problems of national security”  is free of charge  and will take place between January 19  and April 24 , 2015.