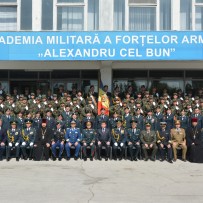 Attending the event, Deputy Minister of Defence of the Republic of Moldova Gheorghe Galbura said that “Military Oath Submission is the cornerstone of your career and is at the same time an opportunity for pride and joy for those who grew you up and educated you. I am convinced that the spirit of comradeship will help you learn the basics and meet the challenges. I want to congratulate you with filing the Military Oath, you are the future of the National Army and the promoters of change, so you have the obligation and responsibility in these three years of study to be persevering, to invest in knowledge and to understand that the future of the National Army belongs to the good ones “.

Also, the commandant (rector) Armed Forces Military Academy, colonel Sergiu Plop stressed the following: “Be proud to be students of the National Army, called to defend the independence and territorial integrity of the Republic of Moldova. There are honored missions that, by performing them with a responsible spirit, rigor and enthusiasm for youth, you will bring services to the homeland and its citizens. And to accomplish them successfully, you have the duty to dedicate yourself with all your energy, training and preparation, ” concluded colonel Sergiu Plop.