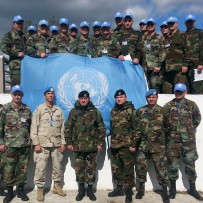 Today, the 27th of September 2013, the training course for National Army officers destined for execution UN missions as observers ended in the Military Academy of the Armed Forces “Alexandru cel Bun”.

The course was completed by 17 officers of the National Army.

During the course, the officers were trained according to the UN standards of training military observers. (CPTM and MeoM STM).

This course was conducted completely in English and included two phases: the theoretical and the practical. The practice was held at the Bulboaca military training base in the period of September 23-27 this year.