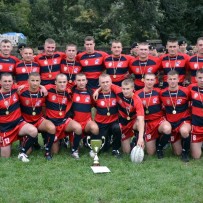 On the 14th of September,  this year, on the territory of Moldovan Rugby Federation was organized a tour Jubilee devoted to a year of the “Triumf” team foundation, of the Military Academy of the Armed Forces, “Alexandru cel Bun”.

The tournament was organized by the Military Academy of the Armed Forces, Alexandru cel Bun “to support the Ministry of Defence, Ministry of Youth and Sport and the Rugby Federation of the Republic of Moldova.

Attending the event, Deputy Minister of Youth and Sports, Mr. Dragos Hîncu stressed that rugby remains the most successful team sport genre in the Republic of Moldova.

The cup was won by the team, “Triumf “ of the Military Academy of the Armed Forces, which defeated the team from the Academy of Economic Studies of Moldova.

The third place went to the team from town Ciorescu.

It should be noted that the academic team, “Triumf” was founded on the 14th of September 2012.