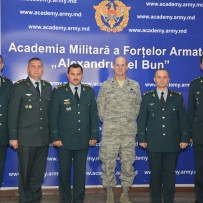 Today, on the 20th of September 2013, the head of the U.S. Office of Military Cooperation, lieutenant-colonel Brendan BARTLETT, paid a visit to the Military Academy of the Armed Forces “Alexandru cel Bun”.

Lieutenant-colonel Brendan Bartlett was familiar with the basic objectives and tasks of the institution during the working visit.

Also, the head of the U.S. Office of Military Cooperation, had the opportunity to visit faculties and other infrastructure objects of the Military Academy.